Here are some easy-to-use methods that can help resolve the non-gimp-image-insert-layer variable evaluation error.

Hello Pocholo.And three more comments:1. You only need to enter the selection parameters (the setting of which must be defined).

Starting with GIMP Performance 1.0, it may contain a powerful scripting language that extends the program's capabilities and simplifies repetitive tasks. This scripting language you are learning called "Script-fu" was based on some programming language and implemented this particular SIOD interpreter written by George J. Carrett when hewas a Boston tutor at University in the late 80s.

This Script-Fu interpreter based on Carrett's SIOD has served GIMP very well over the past decade - thousands of scripts have been written and executed by GIMP users - but the software is starting to show its maturity, so the GIMP developers decided to replace it with the more modern Scheme interpreter under called TinyScheme. One of the main reasons for this change is the promotion of international languages ​​and fonts for which siod does not usually offer a layout. All other benefits are there too, the lack of international support was the biggest one for one person.

While this change required significant effort on the part of the developers (especially Kevin Cozens' gimp) and significant changes made to the GIMP code, GIMP users may want to make very few visible changes. The GIMP script extension will continue to be called "Script-fu" and most of the scripts already available can still work with the new TinyScheme-based interpreter. 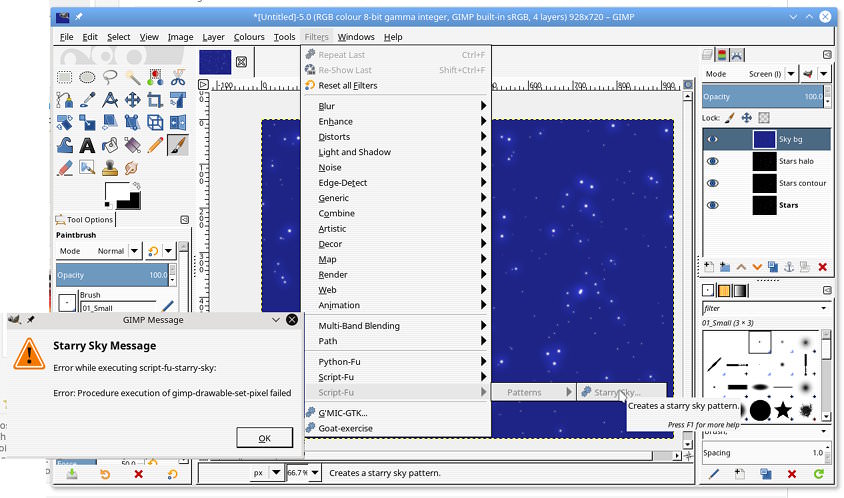 Despite the desire to minimizechanges to GIMP internals with this change, there are differences between the SIOD based interpreter and the TinyScheme based script that cause problems when trying to use more mature versions. Can run scripts with GIMP 2.4 and many newer versions. What follows is almost a full description of some of the difficulties you may encounter, and exactly how to take steps to help you fix them.

By far the most common problem you can expect when using an old script is that it can assign a value to a custom prefix value without declaring a variable. A SIOD based foo script would allow an operator like X (set! 4) even if "x" was not specified - " x <" /tt > will automatically be set as a global variable. The new script Von arten Script-fu protects against this situation because programmers must first declare custom. The offending script fires an error message saying: Tt>Error: "< variable : set! :unbound x". Use

Mapping to global variables is generally not recommended, as another function (written by a completely different author) could use the same name, and these five functions would interfere with each other the most. For this reason, the correct declaration path is " x" in the previous example means using a new declaration let or let*:

SIOD considered an empty List as FALSE if it occurs within the specified time (if, cond, not, =, etc. of the conditional) check, while the Scheme standard dictates that it must be specified as TRUE. Programmers have been aware of this difference since the beginning, and it is unlikely that any web programs will be found that rely on non-standard behavior but siod, it is believed that this is possible. An easy solution is to use "Pair?" function to see the list. For example, replace (while lis ... .) . to .(while .(pair? .lis) ....). Alternatively, (not (null? lis)) can be used instead of (pair? lis) with.

Accessing The First Element Type Of An Empty List¶

In SIOD, taking a specific "car" from list one empty returns list one empty; in This little schema has become illegal and generates an error message ("

Fixed: How To Restore Qemu Image On Windows.